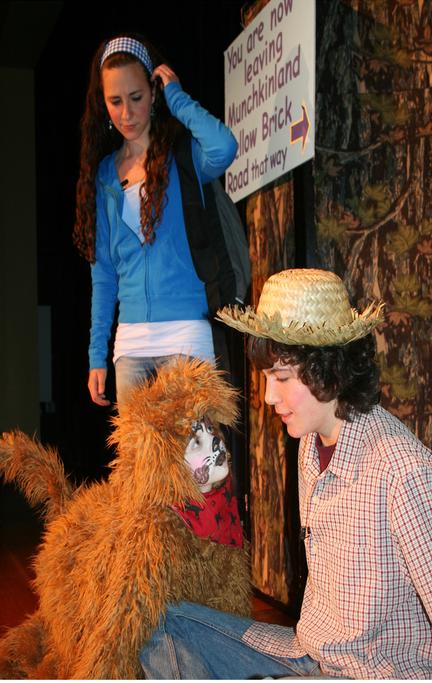 The original story of The Wizard of Oz was written in 1900 by L. Frank Baum as, as he put it, "a modernized fairy tale". In the last one hundred years, many versions of his story have appeared as plays, musicals, movies, and spin offs. This version adds to the tradition a musical that is entertaining to kids of this generation- entertaining not only to those who see it, but for those who perform in it. Many people think they know the story of the Wizard of Oz because they saw the Judy Garland movie. Although the movie contains many elements of the book, it leaves out many story lines and even changes the plot to suit its own "modernized" themes. That movie, made in 1936, was concerned with the Depression, the mid-western dust bowl, and the plight of the common man. This version touches on issues such as technology, self esteem, and youthful restlessness. The Scarecrow is a very clever young man who happens to have learning disabilities, specifically, he can’t read. The Tin Man is a robot who aspires to be more like a real human. The Lion is not really a lion at all, but becomes one in his heart by proving his bravery. The Wizard is a scientist/inventor stuck in Oz when he impulsively tries out his alternate universe machine on himself. And Dorothy is a dissatisfied teenager who’s not sure what she wants in life. The songs are modern rock styles and lend themselves to contemporary dance moves. But in the end all the versions of The Wizard of Oz have one thing in common- the story is about home and family. No matter how an author strays from the original story line, if they hold on to that central theme, it will always be unmistakably L. Frank Baum’s The Wizard of Oz.
The sets can be anything from suggestive minimalistic to elaborate spectacles. The casting likewise is extremely flexible. The gender of the various characters can be reversed. The Paper Girl could be a boy, the Tin Man or the Lion could be a girl, etc. The number of cast members may be made smaller by combining roles or by having the same actors play Munchkins and Winged Monkeys, or Emerald City residents and Southlings or Winkies. To make the cast larger, just add extras.