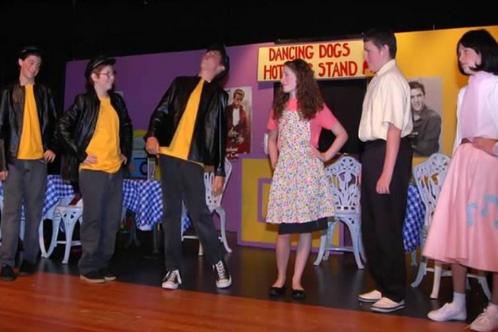 Rock and Roll Heroes,                  A  Fifties Musical
This fun, family musical takes place in the days of poodle skirts and bobby socks, motorcycles and ducktails, and plenty of old time rock and roll. Two groups from the opposite sides of the tracks, the Greasers and the Soxers, come to battle it out on the stage
The Soxers come to the Dancing Dogs Hot Dog Stand after their last day of school to celebrate graduating high school (“A Glorious End”). Their waitress, Juliet, whose mom owns the restaurant, is smitten with, Roger, the captain of the football team (“Would Ya Call it Love”). Meanwhile Juliet’s mom is asked to help chaperone the Senior Prom by Mr. Merkowitz (“The Merry Go Round”). Juliet’s brother, Mickey, is the leader of the local motorcycle gang (“Don’t Mind Bein’ Bad”) and gets into a feud with Veronica, the richest girl in town, over who will win first prize at the Rock and Roll Festival. The soxers and the greasers run into one another at the beach and air their differences (“Just the Way it Is”) But before the festival, there is the Senior Prom (“Ooo Boppa”) where, surprisingly, the two smartest (and nerdiest) kids are voted prom Queen and King (“Silver Moon”). Veronica, who had expected to win with Roger, accuses Mickey, and rightly so, of rigging the ballots and finds a way to retaliate. As angry as she is, she’s not sure she really wants to be the “perfect” girl (“Straight and Narrow”). With a great Elvis type song, Mickey easily wins the soloist category (“Baby I’m the One”), and gets a record contract, defeating his soxer rival (“Queen of My Heart”). The greasers then sing a great duet (“Biker Girl”), and Mickey has also come up with a plan to keep Veronica out of the contest. But at the last minute Mickey’s sister, Juliet, volunteers to sing with Roger and together they win the duet category  (“Young Love”). A surprise ending brings the two factions together and it all comes down to “A Glorious End”.
With its energetic Fifties music and comic rivalry, “Rock and Roll Heroes” promises to take you back to a time when everyone loved to rock out to a good tune.  The show can be done with elaborate sets or none at all. It’s a sure thing your actors will have a great time reliving the Fifties.