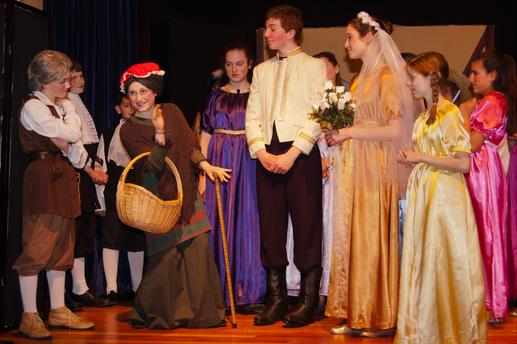 This re-telling of a well known Grimm’s fairy tale contains all of the elements of the original story while adding an additional layer of meaning and an entertaining thread of comic relief. It’s the story of a loving but extremely overprotective father and his rebellious daughters who retreat to a secret dream world and dance their nights away, until one day a dashing young soldier discovers their fantasy world. A mysterious old woman helps the princesses avoid the laughably unsuitable princes who come to try and uncover their secret. Meanwhile, she gives the soldier a magic cloak which enables him to gain entrance to the palace and solve the mystery. In the process, the soldier gains the love and respect of both the king and his daughters.

The clever lyrics of the songs "Daughters" and "Parents" explore those relationships with humor and insight. The ballads sung by the soldier and by the princesses are about the dreams everyone has of finding true love. The comical "Prince of a Guy" points out that wealth and title don’t necessarily equate with princely character. And when the craggy old woman breaks out into the jazzy "Give it All You Got", our down-on-his-luck soldier finds the courage to go after his dreams.