A Musical based on the play by William Shakespeare

True to its Shakespearean origin, this musical is a delightful adaptation of an unforgettable tale. It demonstrates Shakespeare’s comic genius in a way that is accessible to all ages and types of audience members. It’s an hilarious comedy about four young people who get caught up in a quarrel between the Fairy Queen and King and spend an hysterically chaotic midsummer’s night in the forest amidst a bungling acting troupe and a swarm of mischievous fairies and sprites. Although the dialogue is modernized, the plot is faithful to the original play. The music captures the whimsical feel of the play. When Theseus returns to Athens, he is greeted by the crowds singing "Hometown Hero". Lysander and Hermia sing the romantic "When Did I Know I Loved You?", and the acting troupe performs the comical "Life of an Actor". The lyrics to the songs of the Fairies and the Sprites are taken primarily from Shakespeare’s own words, as is Puck’s endearing ditty.

A straight-faced Helena sings the comic "A Loser in Love" while Demetrius and Lysander fight over her, leading to the song "All is Fair in Love and War". The gorgeous ballad "I Know a Bank Where the Wild Thyme Grows", sung by Titania and Oberon, is followed by the "Blessing of the House", a sweet and happy ending to this high spirited comedy.
The cast can be modified for as few as 15 or as many more as you choose to add to the various choruses: fairies, sprites, Athenians, and servants. Double casting is possible. There are two sets: a palace and a forest scene. 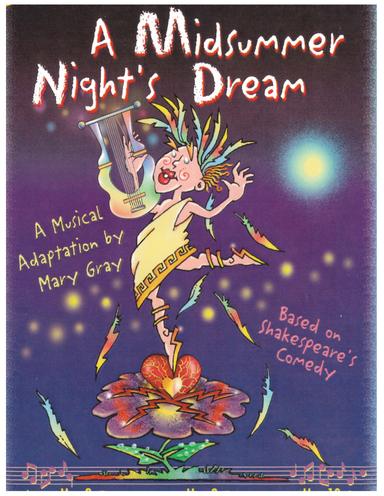