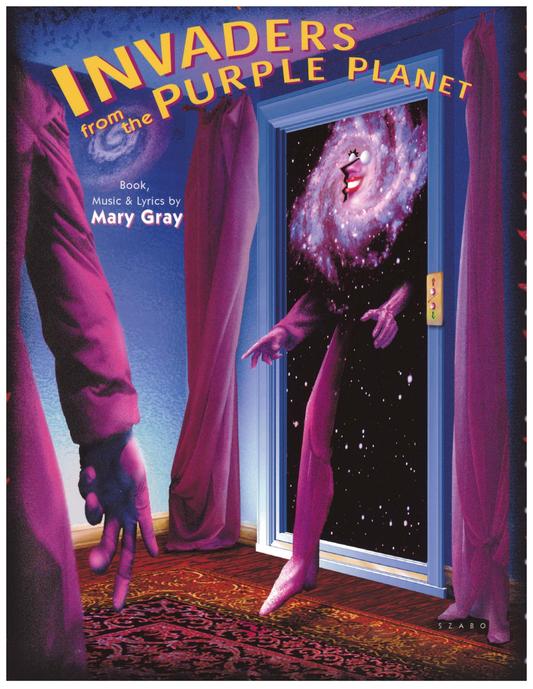 What would happen if creatures from a technologically advanced planet sent undercover investigators to earth to see if earthlings posed a threat to the galaxy? What if those investigators decided we were a violent race that should be obliterated before we discover a means to travel to other planets in other galaxies?  The answers to these questions are the story line of the musical, "Invaders from the Purple Planet". The heroes of this story are three regular kids who just want everyone to get along ("Give Us a Break"), as each group of kids in their school sing about the virtues of their special click. The popular girls sing about how nice it is to be "Daddy’s Girls", the jocks proclaim that everything in life is a game ("The Game of Life"), the class clowns brag about how cool they are ("You the Man"), and the school bad boys sing about their gang ("Black Hearts"). Meanwhile, some of the kids who seem fairly average, turn out in fact to be researchers from the Purple Planet. At one point they hold a contest for Most Unusual Pet, during which the entrants sing songs glorifying tree crabs, tarantulas, rats, skunks, and frogs.   But all is not well. After reading the investigator’s scathing reports to superiors about life on earth, a trial is convened and our heroes find themselves defending their planet in the hopes that the Invaders will decide not to destroy earth. Some of the Invaders come to the defense of earth’s people and offer some good advice ("Spread the Love Around").   "Invaders" is a musical comedy with the emphasis on comedy. It's also about the more serious themes of how kids treat other kids and how people in general SHOULD treat one another and the other living things that share our planet. And most importantly, it has purple aliens that sing and dance! Its message of tolerance and kindness appeals to audiences of all ages, both young and old. There are two simple sets- the exterior of a school in Act I and a living room in Act II.