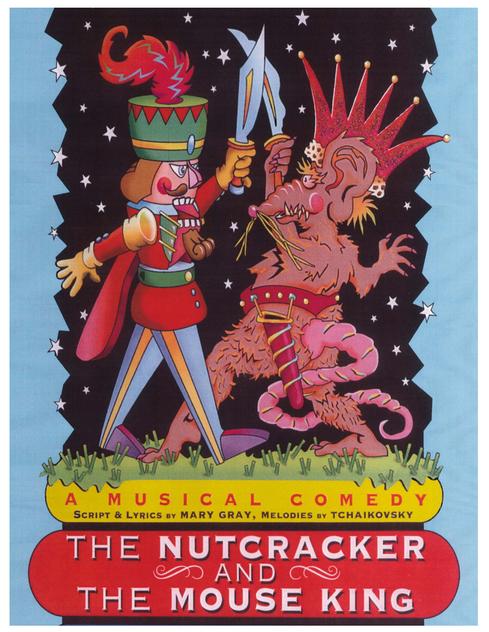 An Award Winning CHRISTMAS MUSICAL Featuring The Melodies of Tchaikovsky.

Based primarily on Tchaikovsky’s ballet score, this play reaches back to include the storyline from the original E. T. A. Hoffman book explaining how the Prince was long ago turned into the Nutcracker who later magically saves Clara from the evil Mouse King. All the classic characters make an appearance: Clara’s mysterious godfather Herr Drosselmeyer, Fritz, her annoying younger brother, the ethereal Sugar Plum Fairy, and, of course, the valiant Nutcracker Prince. Though it includes details absent from the Tchaikovsky ballet version, the plot essentially follows the structure of the ballet and will be recognizable to those familiar with the ballet.
The songs utilize Tchaikovsky’s melodies, modifying them only to the extent necessary to make them easily singable. The play opens with the guests at the Stahlbaum’s Christmas party toasting their hosts and singing to the "Overture". The children then decide to have a parade to "The March of the Toy Soldiers", interrupted by Herr Drosselmeyer’s arrival. He performs a hilarious puppet show for the children, and then Clara is off to bed, only to be awakened by the Mouse King and "The Mouse Brigade". The Nutcracker Prince saves Clara and together they sing the majestic "Nutcracker Theme" as they venture off to the Kingdom of Sweets. Act II is filled with the well known tunes from the ballet: "The Sugar Plum Fairy", "The Arab Dance", "The Trepak", "The Reed Pipes", and others, culminating in the full chorus singing "The Waltz of the Flowers". The story is told in two distinct acts, offering the choice of having a large cast or, by doubling, having the actors from Act I reappear as other characters in Act II. There are two sets: the Stahlbaum’s drawing room in Act I and the Palace of the Kingdom of Sweets in Act II, plus a small removable set or bed to represent Clara’s bedroom.