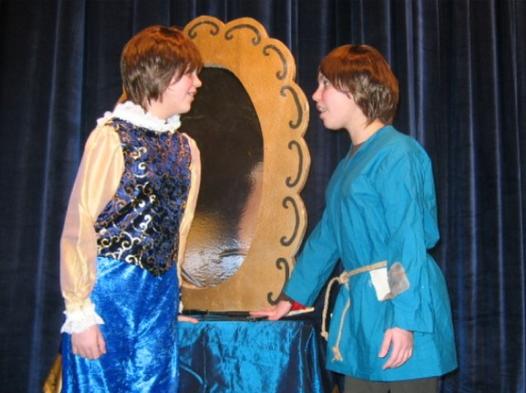 A Musical Based on the Book by Mark Twain

Based on the timeless story by Mark Twain, this musical is about two boys who meet quite by accident.  Tom Canty, the pauper, yearns to learn to read, travel, and wear beautiful attire, while Prince Edward yearns to play in the mud and swim in the river. Just for fun, the two switch clothing only to discover that they are “Two Peas in a Pod”, identical in appearance.  When the guards throw the Prince out of the palace, thinking he is the pauper, the other Royals wonder why the “prince” denies being the Prince. They worry about what they will do now that the Prince is “Funny in The Head”.  Edward’s sister, Princess Elizabeth, and Humphrey Marlowe, the royal whipping boy (“Blame Me”), befriend the pauper, whom everyone still thinks is the prince. When King Henry VIII dies unexpectedly, the pauper finds himself quite “Alone” and about to be crowned King of England.

Meanwhile, the actual prince is kidnapped by Tom’s evil father and taken to a camp where thieves (“Thieves Are We”) headed by Heartless Helen, plot a robbery for which they need a small boy- the prince. Prince Edward is rescued by Sir Myles Hendon, just back from the war and on his way to re-unite with his beloved fiancee, Edith (“Softly”). But Myles is thwarted by his evil younger brother and thrown into jail.  Just before the pauper is to be crowned, the Prince is able to gain entrance to the palace and claim his rightful place and all is put right again.

The subtle humor in this musical demonstrates the injustices of the society of that time (“Bread”, “How to Be a Royal”, “Inside Out”) as each boy learns that there are both advantages and disadvantages to being either a king or a poor man.  There are numerous interesting and unique roles for the actors. Casting is extremely flexible and there are ingenious directions on how to create identical “twins” from children who do not look exactly alike- it’s done with acting technique- not make-up.  In addition to several small representational sets, there are two main sets- Offal Square, where the commoners gather, and the Palace throne room.