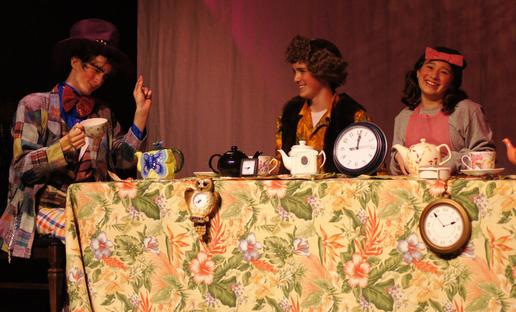 Alice’s Adventures in Wonderland” by Lewis Carroll was first published in England in 1865.  There have been many plays, movies, and musicals written through the years based on Carroll’s Alice books. Most do not follow the plot line precisely, but rather employ his iconic characters to create a flight of fancy that echoes his original work.  This adaptation features “humanized” versions of  all the classic characters- the Mad Hatter, the Caterpillar, the Cheshire Cat, the March Hare, the King and Queen of Hearts, the Twins, the talking (and singing) flowers, and many other recognizable Wonderland characters, all portrayed in new and quirky ways.                The story is being told by an elderly Mr. Carroll to a young girl named Alyssa, who falls asleep and has a magical dream (I Had a Dream) about a girl named Alice who falls down a rabbit hole and tries to escape by becoming very small (The Bigger I Am).  She meets a group of oddballs who want to play with her (Play the Game) and wanders into a field of singing flowers (Bloom) who direct her to speak with Caterina Pillar (Who Are You?).  She then stumbles upon a Tea Party where she meets the Mad Hatter, the March Hare, and Dora (Madhatter's Song) all of whom are obsessed with time. They tell her about the Croquet Tournament at the palace of the Queen of Hearts. On her way to the tournament, she meets Chester (the Cheshire Cat) who sings about the joys of living on “The Dark Side”, and also the Duchess who, like most of the inhabitants of Wonderland, seems quite mad. Upon reaching the palace, Alice is drawn into the Queen’s croquet tournament and ends up going on trial for Crimes Against Wonderland. Everyone she has met along the way, turns up to testify against her resulting in a guilty verdict (Off With Her Head). Chester and Caterina help Alice escape and give her Up Juice so that she can return home.  Loaded with adorable, hilarious characters, this production promises to be loads of fun for both actors and audiences of any age.
The sets are simple and suggestive, relying mainly on colorful, creative costuming and lighting. The cast can be small, with Mr. Carroll appearing also as the Mad Hatter and Alyssa also playing Alice, or the cast can incorporate large choruses (The Queen’s Entourage, the talking flowers).