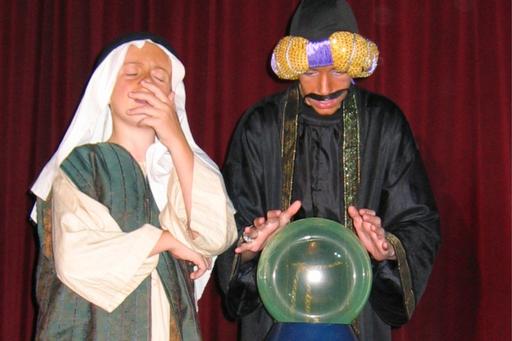 One of the all time favorite stories, this musical is filled with dancing, singing, and magical antics. The story is told by Scheherazade and her sister, Donya, in an attempt to convince King Shahriyar to spare the women of their country. In their beautiful ballad "Love Will Find a Way", they cajole and inspire the king with the tale of Aladdin’s courage and cleverness and his love for the Princess Layla.  Aladdin begins as a poor, but spirited young man ("The King of Chaos") who is tricked by the evil magician Darwah into going into a cave to recover a magic lamp. Before he becomes trapped in the cave, not only does Aladdin find the lamp but also the Genie of the Ring, who helps him escape, as well as a magic carpet. He uses the power of the Genie of the Lamp ("Wish") to make himself rich enough to ask for the hand of the princess ("Fly with Me"). Her parents, the Sultan and the Sultana, are pleased with the match, and along with the royal astrologer sing that it was "Written in the Stars".  Unfortunately, Darwah tricks the princess into giving him the magic lamp and takes her and Aladdin’s entire palace off to a foreign land. But the princess and her sisters are very clever ("She Can Can") and help Aladdin recover the lamp. In return for her help, he gives the Genie of the Ring her freedom and returns the Genie of the Lamp to her cave where she will be safe.
There are three sets- a market place, a palace, and an even grander palace. There is also a cave scene which can be done all in blackout with a spotlight on the lamp and the carpet. The cast is very flexible and the script includes suggestions for decreasing or expanding the total number of characters.