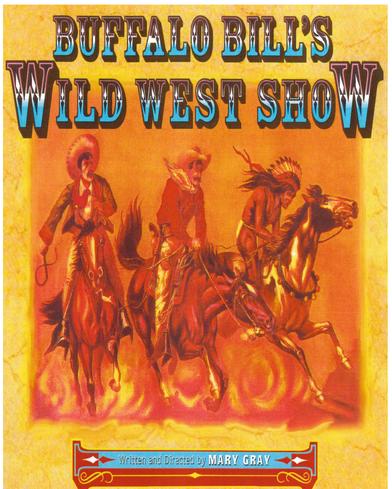 "Welcome to a walk through history" Buffalo Bill Cody sings in the opening scene of this rollicking musical about the renowned touring show which featured such famous western heroes as Wild Bill Hickock, Calamity Jane, Annie Oakley, and Sitting Bull. From 1883 to 1910 the Wild West Show toured the eastern United States, and also toured Europe in 1887 and 1891, where it was a favorite of European royalty. This is also the story of a town in Virginia which is visited by the Show, a young man who wants to become a famous trick rider, the young girl who loves him, the town’s mayor (who has a few shady secrets), and the N.A.G.S. (Neighbors Against Gross Savagery) who protest the show- all in a seamless mix of entertaining fiction and historical relevance. Finally, it’s a story about dreamers and lost dreams. The "show" within a show features cowboys, "Indians", clowns, saloon dancers, rope twirling, shoot-outs, singing cowgirls, and the bombastic Buffalo Bill himself. The songs are a mix of styles from old timey western to classic Broadway balladry. The cast includes many fun cameos and can be modified for as few as 30 or as many as 70 or more. There is a single uncomplicated set that can be decorated in various ways.