LOST AT SEA is a fast paced comedy about a small cruise ship, The Puka Puka Princess, that becomes shipwrecked on a small island that isn’t on any map. Among the quirky passengers is an inventor who wants to market his Energy Transmuter and quit his day job selling mattresses, his older daughter who’s just graduated from tattoo school, and his bratty younger daughters, who are mostly responsible for the boat going off course and sinking on the reefs. On board also are the ship’s entertainer, Eric Clayton, and the seasick maid, Anita, who discover that "Home’s not a Place, It’s a Face". The island, which the natives consider to be the capital of the world, is ruled by Queen Momomahi, whose simple philosophy is "Life is a Party- Come Early, Stay Late". But the queen’s younger daughter, Kiki, has a much different concept of how things should be "On My Island" if she were queen. The island’s last visitor, eighteen years previous, is Max Forte, a musician from New Orleans who put together the island’s Dixieland band ("Dixie Beat") and taught the natives to speak English because their native language didn’t fit a twelve bar blues. The interactions between the passengers and the islanders is comical and sometimes dangerous, but when the rescue boat arrives, some passengers decide to remain on the island ("Island Love"). The music is a fun mix of styles with everything from Hawaiian, Calypso, and Reggae to Dixieland jazz and blues. The sets are extremely simple and production suggestions are included. 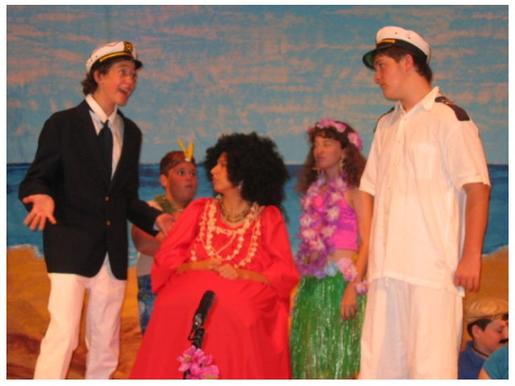