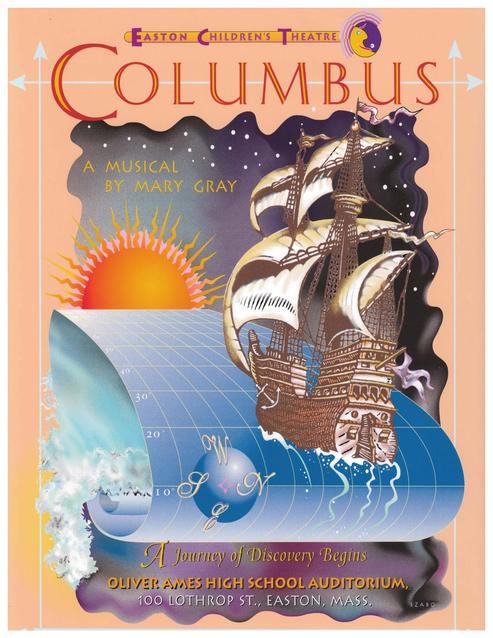 Hero, villain, or misguided dreamer? This is an intimate musical portrayal of COLUMBUS, the man, and the many women behind his exploits. The plot does not glorify Columbus, but shows the European view of native people as needing "civilization" and the natives view that the explorers were, in their view, lacking civilization.  Also missing from history were the women who propelled Columbus along the way. It begins with Christopher’s childhood as a weaver’s son in Genoa, Italy, his closeness with his brother, Bartholomew, and his restless aspirations to explore the world. He meets his future wife, Felipa, and her wealthy, influential mother, Dona Moniz. Then we follow Columbus as he travels to the royal courts of Europe until finally finding support from Queen Isabella of Spain and her female advisors. Once in the New World, we see his interactions with the native peoples, and his triumphant return to Genoa. The music is modern and eclectic. Though the melodies are simple and singable, they convey a sense of exploration and newness. Offering to show Christopher and his brother her husband’s voyage journals, Dona Moniz sings the evanescent ballad "Our Own World". Meanwhile, the self-righteous school teacher expostulates the hilarious "Everybody Knows That". And as Columbus and Bartholomew travel from court to court, the Royal Chorus narrates with "You Can’t Go ‘Round". Queen Isabella and her female advisors urge Columbus to go "Beyond the Horizon". When he reaches his destination of India (or so he thinks), the islanders and the sailors have much different ideas as they sing "Oh, Pretty Island". In her song "The Invisible People", Felipa wishes she were the one who could have made the journey. The settings are all connected by the theme of the ocean and the setting sun of the western horizon. All sets can be suggested with an "ocean" backdrop and minimal props. We think you will agree that this musical is both thought provoking and entertaining for all age audiences.